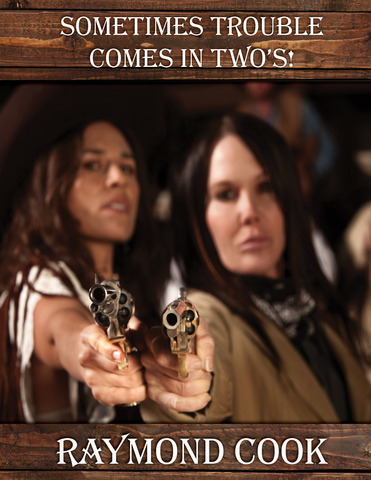 Sometimes Trouble Comes In Twoâ€™s! Â© 2013 by Raymond Cook is a 213 page eBook story about Pepe Martinez and his family who raise and sell horses in 1899. After getting a federal contract to deliver 200 horses to Fort Collins, Colorado, his wife and four sons along with five ranch hands set out for Fort Collins. Pepeâ€™s daughters, Rosenda and Angelique stay behind to take care of the ranch. But after the horses are delivered, Pepe, his wife Maria and his sons are murdered by their ranch hands.
When Rosenda and Angelique receive word of their families deaths at first theyâ€™re devastated before revenge fills their hearts. With the help of a gunfighter, the two women learn how to draw, aim and shoot very fast. They set out riding from town to town hell bent on catching up to each killer. Along their journey they will be confronted by men who think they can take the pistols on their hips away from them. After a catholic priest traveling to the town of Rifle to oversee an orphanage leaves their camp, he is murdered by two fur trappers and an Indian scout.
Later Rosenda and Angelique will find themselves being hunted by the same men. As the days turn to weeks and the weeks to months, both women are beginning to feel discouraged until they find one of the men they have been searching so long for. But hunting their familyâ€™s killers down comes at a high price as both women are shot. After they recover from their injuries, a wildfire cuts the women off in three directions and theyâ€™re forced to flee into the rugged mountains to try to outrun the fires.
By the time theyâ€™ve killed the last three men who murdered their family, they take the reward money they were paid and search for a new place to set down roots. They choose to call the town of Marble their new home and have their house built. But their life isnâ€™t complete until they return to the orphanage and adopt two small children. Take a journey back into time and see through the eyes of Rosenda and Angelique the challenges they face.

This is my 14th of 24 western frontier eBooks I have written since 2011.
To check out my 213 page Western Frontier eBook, Visit Amazon: